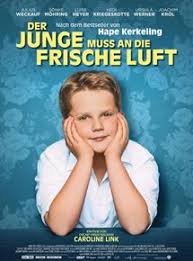 Hans Peter (Julius Weckauf), his mother Margaret, father Heinz and brother Matthes live together with his paternal grandparents Bertha and Hermann in the German countryside. Later the family moves into a house shared by his maternal grandparents Änne and Willi in Recklinghausen, a small town in the so-called Ruhrpott, in the central-western part of Germany. He enjoys interacting with a large extended family, especially with his various aunties: Gertrud, Lisbeth (who is a nun), and Annemarie (who sings at every opportunity). Perhaps they are middleclass, but there is enough money to buy a horse and the whole family goes to the stables to watch him learn to ride. This is Hans Peter at age seven to nine, 1971-73. He is a nice boy, a bit “plump,” with a talent for comedy. For example, he dresses up as a princess for Mardi Gras, entertains an appreciative audience with a small role in a school play, and impersonates customers at his grandmother’s small general store. He loves to watch comedians on television. This talent is a life-saver, as life has its tragedies, in this case the death of two family members. Sometimes his comedy goes overboard and the family says, “The boy needs some fresh air” which is the English translation of the title.

This is based on an autobiography of the same title by Hape Kerkeling, in which he often quotes his grandfather Willi, who says, “Everything is possible if you don’t give up,” something  Willi learned on a  300-kilometer foot march home after serving in World War II. Director Caroline Link turned 60 pages of Kerkeling’s life into a biopic. If you are familiar with Kerkeling, as artist, musician, comedian, and author, you might watch the movie with images of him in your mind. Anyone with no knowledge of the real Kerkeling will appreciate the film, simply due to the talented new-comer, nine-year-old Julius Weckauf, who plays young Hans Peter. This is Julius’ first film; he was chosen after the production crew sorted through 5000, and interviewed 1000, candidates in casting. He definitely has a career ahead of him, if he decides to continue along this line. (Becky T.)