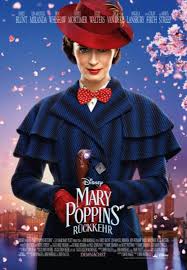 Disney is taking us back to Cherry Tree Lane, where the mischievous Jane and Michael Banks were scaring away one nanny after the other, until Mary Poppins, practically perfect in every way, came along and taught not only the children, but the adults, what family is all about.

In this Disney masterpiece’s sequel, we are set about 25 years after Mary Poppins left Jane and Michael Banks, flying off with her magical attire, once the wind had changed.

Today, the Banks children are all grown up. Michael (Ben Whishaw) has children of his own, and Jane (Emily Mortimer) is an independent woman living by herself. One year after Michael’s wife had died, he finds himself in deep money trouble. Seems like the perfect time for good ol’ Mary (Emily Blunt) to come back, descending from the clouds with her talking umbrella, to once again help the Banks family. Together with her old friend Jack (Lin-Manuel Miranda), the friendly street lamplighter, Mary Poppins takes the new generation of Banks children on yet another adventure that again, won’t just help the children, but will show the adults, how wonderful life can be.

This powerful musical pops with colors, adventures and memorable songs that may not quite reach up to the classics “A Spoonful of Sugar” or “Supercalifragilisticexpialidocious”, yet do not need to shy away from comparison. However, there is nothing to compare anyway. Though the narrative pattern is close to the original, it presents a whole new spin on Mary Poppins’ Adventures, who even rocks a bob. Thanks to Emily Blunt who makes this magical nanny her all-own Mary; we almost forget about Julie Andrews and her spoons of sugars and such nonsense.

Colorful and exciting for children, this film is actually for the grown-ups. For those who watched Mary Poppins as a child, and as adults are painfully aware that life does not get easier when you get older. You worry more, there is more to worry about and you cannot seem to overcome the longing for the innocent happiness you believed that you had lost long ago. Beautiful and practically perfect in every way. (Karen Eve O'S.)
Another Opinion by Rose F.

Let’s go fly a kite as Mary Poppins (Emily Blunt) returns to the Banks family in their time of need. The Banks children of the Mary Poppins (1964), Michael and Jane, have grown up and now Michael’s three precocious children are in need of a nanny. With the help of her friend Jack (Lin-Manuel Miranda), her trusty umbrella, and a dash of magic, Mary Poppins is determined to bring joy back to a family overwhelmed by a personal loss.

Whenever a sequel to a beloved classic is released, there is always a fear that it will not be capable of living up to the original. In many instances, this is the case, whether due to actual problems with the quality of the production or the mere influence of nostalgia. However, somehow Disney has managed to recreate the magic of the original Mary Poppins some 54 years after its release.

Director Rob Marshall and screenwriter David Magee clearly have a fundamental understanding of what made the original film great and also how to play on nostalgia without it feeling tired or schmaltzy. The songs by Marc Shaiman and Scott Wittman evoke the original film and are catchy while not being too derivative. However all of this would mean nothing if were not for the true standout of Mary Poppins Returns, Emily Blunt.

The role of Mary Poppins seems so intertwined with Julie Andrews’ voice and demeanor that it seems impossible for anyone else to take over the role in a meaningful way. Yet, Emily Blunt not only capably manages this feat she also succeeds in making the role her own. There is no doubt, that she will be lauded for this performance. Lin-Manuel Miranda also charms with his terrible cockney accent in the same eternally mocked style of Dick Van Dyke. Add to this a talented cast of supporting actors, some enjoyable dance scenes, and a wonderful amount of traditional animation, and what results is a delightful new family film that no one should miss.