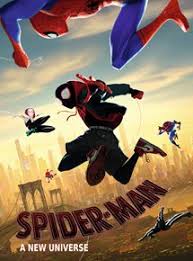 a fun version of Spider-Man, this time in animation! Here we have Miles Morales, an African-American-Hispanic teenager from Brooklyn. His father is a strict police officer, his mother a nurse, and both are tremendously proud that son Miles has been accepted into a school for gifted students in Manhattan. Miles would much rather be among friends in his old school in Brooklyn, but he must adjust. Little does he know, but a more challenging need to adjust will soon test his abilities. A radioactive spider bites Miles and he begins to develop super powers, such as sticking to the walls and becoming invisible. Along the way he meets other super powers, many well-known from the original Marvel Comics:  Peter Parker, Spider-Gwen, Aunt May, as well as new characters such as Spider-Ham, Spider-Man Nor and Peni Parker. Now Miles is a super hero and must save the world against Kingpin and Prowler.

We, and our kids, age eight and older, can all identify with Miles. Producer Christopher Miller said, “In a way, the heart of the movie is Miles’ coming-of-age story and a key theme is that we all have powers and we all need to face up to our responsibilities regardless of who we are or where we are born.” Animation is not easy to create; in this case each artist could produce one second (!) per week until the 116 minutes were complete. They were so talented with these drawings, that we sometimes we feel as if we are also inside a comic and we all leave the cinema as super heroes. This is amazing, considering that there are already 56 filmed versions of Spider-Man, and still this new animated version has carried the story to a new level, cheered on by the 28 songs (Daniel Pemberton). Stay until the final credits have rolled and you’ll be rewarded with a new version of “Jingle Bells” to start the holiday season. (Becky T.)