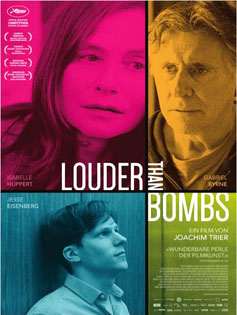 Joachim Trier is a Copenhagen-born Norwegian director and writer whose previous films, Reprise and Oslo, August 31st, have won international recognition. Louder Than Bombs, a deeply moving family drama about grief, memory and identity, is the first of Trier’s films to be shot in English and to feature a major international cast. A graduate of the European Film College in Ebeltoft, Denmark, and the National Film and Television School in London, Trier is the latest non-native English speaker to effectively probe the culturally specific yet universal drama in an American family. Trier’s outsider status as the director of Louder Than Bombs is similar to that of Ang Lee, whose film The Ice Storm dissected fragile family relationships in a similarly affecting manner.

Gabriel Byrne plays Gene Reed, an Irishman and former actor who has switched careers to spend more time with his family. He now teaches high school English in a comfortable suburb on Long Island, New York. Older son Jonah (Jesse Eisenberg) is a recent professor and brand-new father who is having trouble adjusting to adult responsibilities. Younger son Conrad is an angry teenager who withdraws into his online world. A catastrophe has recently paralyzed the family: Gene’s wife and the boys’ mother (Isabelle Huppert), the glue that held them together, has died in a car accident. Isabelle Reed had only recently retired from her career as a highly-acclaimed war photographer who spent months at a time in crisis areas. Following her death Jonah returns home, ostensibly to sift through his mother’s final photos to see whether they can be used in an upcoming exhibit. Sidetracked by an old lover, he keeps extending his stay to avoid being with his wife and new baby. Meanwhile, Isabelle’s colleague lets Gene know he’s writing a major article about her for the New York Times, respectfully noting that he will address the fact that Isabelle’s death was actually a suicide. Gene seeks solace in a relationship with a younger colleague at school, which wracks him with guilt. Conrad seeks affection and affirmation from an oblivious cheerleader while directing his fury and sorrow at his father.

As the Reeds struggle to work through their loss and move forward with their lives, secrets are uncovered about the living and the dead. Through windows and camera lenses, Trier reveals the present and the past. His non-linear story is interwoven with montage sequences that highlight the characters’ differing perspectives. Isabelle Huppert is superb as always. Though her character’s absence is sharply felt, her warm - yet distant - presence looms large in flashbacks. Torn between her family and her work, she is distressed by the dissociation of her two lives at home and abroad. Like the film’s director, Isabelle and Gene are foreigners in America and in the process of self-identification. The first Norwegian film since 1979 to be entered in the grand prize competition in Cannes, Louder Than Bombs is a major emotional achievement. (Brenda B.)