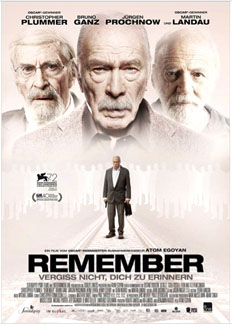 In this cohesive, well-structured story, two nonagenarians living in a Jewish assisted-care home have connived an elaborate plan. Max (Landau) reminds, and urges Zev (Plummer) that with his wife gone it is time for action. But, it is imperative that dementia-addled Zev follow wheelchair bound Max’s hand-written, minutely specific instructions. Initially, all proceeds smoothly. Zev’s first slipup is averted through his young seat companion’s help. Conversely, his son (Czerny) deals with Zev’s annoying disappearance sure he cannot be far. In Cleveland, it turns out Rudy Kurlander #1 (Bruno Ganz) was in North Africa with Rommel during World War II. Phoning afterward, Max reiterates their goal—to track down the ex-Nazi guard living in America under an assumed name. The avenger is thwarted again in Canada, and Idaho where his encounter with a Nazi aficionado (Norris) turns perilous. For once, Zev calls and tells Max—with their aim embedded in his head—retribution is at hand. In front of a closely-knit audience, the nemesis indeed meets his match in a jaw-dropping, remarkable finale.

The milieu crafted by director Atom Egoyan, with Benjamin August’s amazing screenplay, draw us into the foxhunt as it unhurriedly reaches a crescendo. Master thespians Plummer and Landau unselfconsciously breathe life into their characters, with stellar support from the cast. Dean Norris, Jürgen Prochnow, and Heinz Lieven are very convincing, while cameo roles from children—Peter DaCunha, Sofia Wells—provide honesty, and innocence. Working in equilibrium is Mychael Danna’s music, Paul Sarossy’s camera, and Christopher Donaldson’s editing. Their impressive collaboration ensures nothing is lost in the telling. Egoyan and August poke-fun at societies’ perception of oldsters, just as inflicted prejudices and preconceptions are ostracized. Humorous bits laced carefully throughout deflect downheartedness in this unforgettable homage to genocide survivors. Some may guess early on there is a grand puppeteer, but nothing will prepare audiences for the grand finale. Remember challenges audiences to remember history’s wisdom. 95 minutes (Marinell H.)