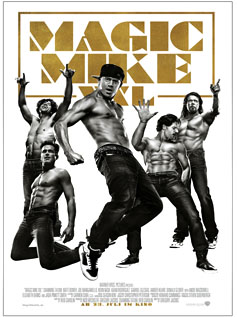 If you are looking for a raunchy road movie, a Chippendales cover group, and a sequel to Magic Mike, look no further. Mike (Tatum) left the male stripper scene three years earlier to settle down to domesticated bliss with his sweetheart Brooke and to expand his custom made furniture business. But a phone call from the Kings of Tampa, his former dance troupe, gets his juices flowing again. Mike hits the road with his old buddies to travel to Myrtle Beach for the annual male stripping convention.

Along the way they perform in an amateur queen contest, reminisce, bond, take a lot of drugs, and then total their van. Mike knows where to go for help and takes his crew to an opulent palatial black male strip club owned by Rome (Pinkett Smith). Seems like the two have a history together. Badass Rome demands he perform as only Magic Mike can, his lap dance/acrobatic prowess wows the ladies, and he gets wheels for the group to continue to the convention in Myrtle Beach. More escapades follow, including a stop at a mansion full of glamorous cougars owned by needy Nancy (MacDowell). It’s R-rated XXL, close to hardcore, but always skillfully screeching to a halt at the edge of porn.

Steven Soderbergh who had directed Magic Mike, has not, as he once threatened, abandoned filmmaking completely; he is cinematographer and editor of this movie. His expertise certainly enhances the quality of a film that could have gone terribly wrong.  Magic Mike XXL doesn’t ever take itself too seriously; there are a lot of laughs throughout the film. It doesn’t take the plot too seriously either. Musical numbers by Matt Bomer as Ken and Donald Glover as Andre help mask the feeble storyline. Zoe’s (Heard Depp) and Mike’s romance is especially wobbly, inauthentic, and superfluous in a film about male strippers. Still, all in all, it is good (not so) clean fun, and more PICTURESQUE than most other road trip movies. (Pat F.)