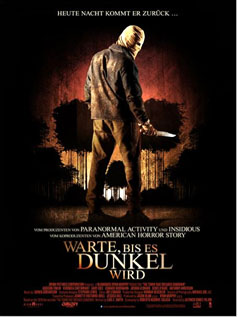 Corey and Jami (Timlin) are at the drive-in movie theater in Texarkana, Texas. Every Halloween in October, the cinema revives the 1976 scary movie The Town that Dreaded Sundown. Soon, however, the couple decides to go for that other most popular activity in Texarkana, namely parking in the woods and necking in the car. Bad idea. They are attacked by a bag head (man with a sack over his head). Corey dies and Jami escapes, but not before the evil doer can whisper into her ear, “This is for Mary to make them remember.” The police, under the direction Chief Deputy Tillman (Cole), take on the case, and Deputy Foster (Leonard) sits in his police car in front of Jami’s house for security. After several more couples are brutally murdered, we realize that Jami is being saved as the killer’s spokesperson to remind the residents of serial killings which happened in 1946. Jami decides to research this original event, since that culprit was never found. Perhaps the murderer is out to revenge a relative or is even related to the original murderer. Or is it Nick whose father committed suicide and whose mother is locked up in an asylum? Or is it perhaps Reverend Cartwright who never stops calling the wrath of God upon these Godless people?

The original slasher movie from 1976 The Town that Dreaded Sundown, (same title as this new film, but at that time called Der Umleger in German) originally set off a wave of similar films such as Halloween (1978) and Friday, the Thirteenth, (1980) up to Gomez-Rejon’s television series American Horror Story (2011-2014). Now we have a new plot, new actors, a new version – same idea and title but not a sequel. That original 1976 version by Charles B. Pierce was based on a true story about a serial killer who terrorized the people of Texarkana in 1946, and was never found. The film holds your attention. I seldom predicted the next step, although when Jami’s grandmother Lillian says, “I’ve never been out of Texas in my life,” I thought, “hmmm – we’ll see how far she gets.” The filming site was Shreveport Louisiana, USA, which is about 120 kilometers from Texarkana. I enjoyed the typical U.S. southern accent, which is an incentive to see it in English. (Becky T.)