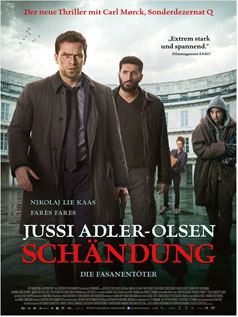 Jussi Adler-Olsen is a leading writer of detective stories in Denmark. He is probably best known for his series of five books which feature detective Carl Mørck. The German titles are Erbarmen, Schändung, Erlösung, Verachtung, and Erwartung – all of which are easier to recall than the original Danish or even the English titles. The first one, Erbarmen, was filmed in 2013. Now we have Schändung , which means “disgrace or rape” but is called The Absent One in English.

This time Mørck receives a visit from a retired policeman, who is found dead in the bathtub the next day. Coincidentally (not really a coincident, of course) he is the father of twins who were murdered 20 years ago; Bjarne Thøgersen went to prison for the deed. There is a connection to a posh boarding school for rich kids and a history of interaction  between several of the former students, e.g. Ditlev, Kimmie and Ulrik and the dead twins Thomas and Marie, and even Bent the lawyer and Marcus the police chief. There are sadistic scenes of subjection among the students.  The ending is rather final – what else with so many corpses. Perhaps you would rather start reading the series and then decide if you really need to see all of this played out in real life. I am sure we won’t have to wait long before the third book comes to the screen; after all, this film was Denmark’s financially most successful film in 2014. (Becky T.)