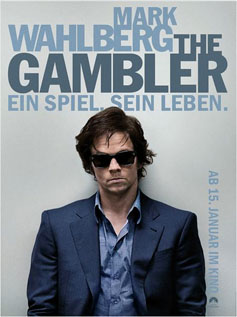 Why should you care about Jim Bennett (Wahlberg), an angry abusive English Literature professor with an out-of-control gambling addiction? The answer: you shouldn’t.

With top-name actors (Wahlberg, Lange, Goodman) you would think that this would be two hours of quality drama. You would be wrong. Neither the actors, the director, nor the writer have created any quality dialogue or performance for the audience to empathize with or want to know more about. The most memorable character is Frank (Goodman). But it’s actor John Goodman playing “John Goodman,” just that big fella whom we all know and love.

The production design by Keith Pl Cunningham was the most memorable take-away from the film. The striking visuals of cool blues, dead grays and dark shades set the tone for the character development in a way that actors didn’t. This palette was absolutely right for the lonely, self-destructive unhappiness Bennett feels as he maneuvers through an underworld of gamblers, gangsters and loan sharks. What’s a wealthy boy to do when a quarter of a million dollars is owed? Of course, run home to mama as the audience witnesses an archetypical dysfunctional relationship – Bennett is saved when mom withdraws money to bail him out.

The film (thankfully) comes to its climatic end with Bennett paying off his gambling debts, being left penniless, as we see him shed his sports coat and sprint through the mean streets of Los Angeles toward the arms of waiting coed, Amy (Brie Larson).

Stay home and clean your closets – a more fruitful use of your time. (Abby M.)