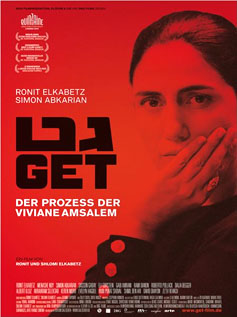 A Jewish couple appears again and again before the same rabbinical court. For five long years! Though Viviane (Elkabetz) left the marital home years ago she has not been able to obtain a ‘Get’ from Elisha (Abkarian). According to Jewish religion—that governs Israeli law in marital matters—this written permission to divorce has to be granted by the husband to his wife. If he denies her this, the divorce cannot take effect. Not even the judges can order it. Nevertheless, Viviane is determined to get a legal decision in this religious matter because for a woman, living her own life without a proper ‘get’, has severe ramifications for her social life. What a quixotic undertaking!

This courtroom drama impresses with its wonderful cast (especially Ronit Elkabetz) but also with its focused approach and its austerity. The set is almost exclusively limited to the same sparingly furnished courtroom. Colors are kept to black and white, except for the few instances when Viviane demonstratively, even defiantly, wears a brightly colored outfit. By placing the camera in close-up mode in the line of vision between husband and wives, thus replacing the one that is addressed with each and every person in the audience, the viewer gets drawn into the courtroom. This exasperating court case—exasperating, sometimes to the point of being comical—should make an interesting play as well. (Carola A.)