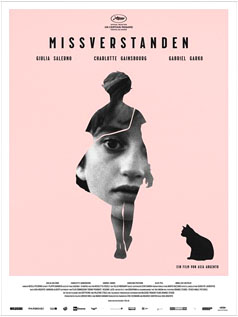 Aria (Salerno) is a fragile and sensitive 10-year-old living in Rome in 1984. Her family has always been dysfunctional and abusive, but now her immature parents are divorcing which leads to her life slowly crumbling. Her mother (Gainsbourg) is a concert pianist and her father (Garko) an American film actor and both have children from previous relationships whom they favor over Aria. Finding herself torn between two parents who don’t have the time or the emotional maturity to care for her, Aria wanders the streets and struggles to come to terms with herself and her life.

Despite having Charlotte Gainsboroug, who now has some star power from Nymphomaniac, the real star of the show is Giulia Salerno in the lead role. All other actors are merely side characters and seem rather forgettable in comparison to Salerno’s surprising emotional depth which moves the story along. She is truly a gem of an actress and hopefully will have much success in the future.

Misunderstood is a vibrant tragi-comedy showing the slow disintegrating effect of abuse on a child. However, things are not always bleak and the film is really propelled by its black humor and the mischievous portrayal of youth. Aria is both the abused and unloved child of her parents, and also a cheeky little girl learning about romance and trying to fit in with her classmates. Longing for love in some way, she pours her heart into her relationship with a black street cat she names Dac. However, even this relationship is doomed for failure due to her father’s extreme superstitions. As the film progresses, so does the tension as the audience realizes that every moment is just one more step towards a tragic conclusion. (Rose F.)