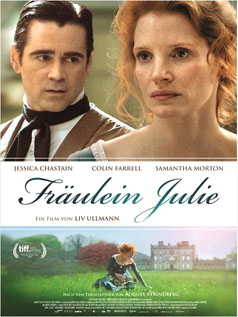 All the prerequisites are there for a triumphant masterpiece. The thespian performances of the three main actors are admirable, at times, awe-inspiring. Liv Ullmann wrote the screenplay and directed Strindberg’s classic work in a way which would have made her mentor Ingmar Bergman take notice. Chopin, Schubert, and Schumann enhance intense moments of both agony and ecstasy in a perfect musical score. The camera work is engaging. The close-ups magnify the tense, emotional interactions of the three gifted actors. The Irish countryside outside the manor house is captured beautifully in luscious wide shots. The final scene is a rivetingly romantic Rossetti canvas.

Ullmann transplants the obvious play-like setting from a Swedish country estate to a manor house in Ireland in 1890. It’s Midsummer’s Eve and the baron’s daughter Julie (Chastain) sets her sights on her father’s valet John (Farrell) defying both traditional class boundaries and John’s pious ever present fiancée, cook Kathleen (Morton). Almost all the action takes place in the manor kitchen. Almost all the social issues of the day are turbulently tossed about: class, morality, economic inequality, religion, and sexual mores. The bitter reality is that in the 1890s a woman, even a baron’s daughter, was doomed if she strayed too far from the straight and narrow.

Somehow the film Miss Julie struggles to reach great heights, but never quite makes it. The emotions are arousingly raw, the sexual tensions are titilatingly engaging. And yet, at some point the movie begins to unravel as the suspension of disbelief rears its ugly head. The distressing scene with the brutal demise of Julie’s pet bird leaves the audience chuckling at rather than mourning for Julie’s loss. Where is Ingmar Bergman, Cannes’ and Ullmann’s favorite director, when he is needed most? Perhaps he could have rescued what should have been Ullmann’s glorious triumph from slowly dissolving into unintended pathos. (Pat F.)