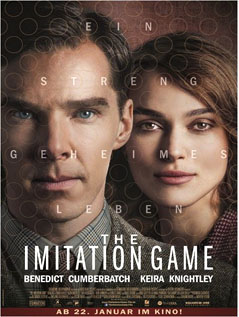 This could be one of the finest WWII movies ever filmed, and the hero never fires a shot. Alan Turing is an unlikely hero, a self-proclaimed “odd duck” whose puzzle-solving mind races against time to unravel the mysteries of the Germans’ seemingly invincible Enigma machine, a constantly evolving device used by military intelligence to encipher and decipher secret messages. Benedict Cumberbatch embodies Turing the brilliant but socially inept Cambridge mathematician. Turing joins a team of cryptologists at Britain's top-secret Bletchley Park who are hell-bent on breaking the Nazi Enigma code to gain access to secret military messages and win the war. Turing spends months building his own machine, a gigantic forerunner of the modern computer, the Turing machine nicknamed Christopher. The greatest threat of sabotage comes not from the Nazis, but from Bletchley Park’s Commander Denniston (Dance) who wants Christopher demolished having lost all patience with the non-conforming Turing. Joan Clarke (Knightley), a double-first maths genius with social grace, is recruited to assist Turing. She has to hide out in the secretarial pool by day in this pre-emancipated era. Clarke seems to be the perfect match for Turning and helps him encrypt both the Enigma code and the mystery of human relationships. He proposes to her to keep her at Bletchley Park though they will never marry. For he confesses to her that he is harboring his own devastating secret. Turing is a homosexual living in an age when he could be imprisoned if that secret were revealed.

In spite of having a Norwegian director, Morten Tyldum, and an American screenwriter, Graham Moore, life in Bletchley Park, in Milton Keynes, Buckinghamshire is successfully recreated with, for a true Brit, only a few irritating lapses. Cuts to archive films including blitzed London add to the 1940s atmosphere. The film shifts back and forth from 1928 at Sherborne School, to the 1940s  at Bletchley Park, and to 1951 in Manchester where Detective  Robert Nock (Kinnear) is investigating Turing suspecting he is a Soviet spy. Nock inadvertently discovers his other secret with tragic consequences. The screenplay is riveting, a true historical thriller anchored in the past and so relevant in today’s cyber age.

Above all, it is the acting which makes the film outstanding, from Keira Knightley as Joan Clarke to Alex Lawther playing the Young Turing. Ultimately it is Benedict Cumberbatch who dominates in his portrayal of Alan Turing, a man who is recognizable in today’s vernacular as someone high on the autism spectrum, the definitive nerd. Cumberbatch’s Turing is ferret-faced, arrogant, socially awkward, intellectually nimble, and sexually suppressed; yet the actor masterfully lets little bursts of Turing’s humanity shine through. Cumberbatch himself would rank remarkably high on the thespian genius spectrum, if there were such a thing. He most certainly will be nominated for innumerable awards for his dazzling performance. As Alan Turing might concede (as the supreme compliment), “That is not an entirely terrible idea”. (Pat F.)

Based on Andrew Hodges book Alan Turing: The Enigma, Benedict Cumberbatch (Alan Turing) exemplifies bumbling brilliance and self-reproachful melancholy as the mathematician valiantly tries to embrace his singularity. His mental counterpart, albeit more socially adept, personable, and realistic is Keira Knightley (Joan Clarke); unluckily for them, Turing has principles. In 1951 a Manchester Detective’s (Kinnear) curiosity overrides moral decency, taking us back to 1939: Bletchley Park’s top-secret Code and Cypher School. A few geniuses are tasked with breaking Germany’s unbreakable code machine, Enigma, to give Allied Forces a fighting chance during WWII.

Graham Moore’s screenplay illuminates moral complexities: quandary’s the cryptanalysts face in what evolves in to a god-like situation, and homosexual Turing’s challenges living in the UK’s prevailing Victorian atmosphere. Director Morten Tyldum methodically poses disturbing dilemmas to prod our conscience and intellects; he emotionally involves us in choices made and exploring consequences. Intoxicatingly tense, production value’s are of a caliber British films are renowned for: Alexandre Desplat’s music, Oscar Faura’s cinematography, William Goldenberg’s editing, et al. Unfortunately, a hormonal castration regime sent Turing to an early grave. Queen Elisabeth granted a royal pardon in 2013, whereby moralists came forward to honor the famous man. Alan’s provocative global bequeaths are: the Turing test, and the Turing machine, i.e. now, computer. This film compels us to examine mass mania’s effect, and fathom how different the world might have been had the “father of Computer Science” not been targeted.

The Imitation Game takes us back to the early days of computer sciences and its implications on society. I liked the way the theme of “rational logic” interwove the personal life of the great mathematical mind Alan Turing with his work, which eventually lead to the victory of WW II by the Allies. While Turing made rational decisions that sacrificed human life for the greater good, he was never actually cruel. Only humans feel satisfaction while administering violence. Due to his genius, homosexuality and social awkwardness, he was often ridiculed and later even imprisoned for being different. Hence, I completely understand why he considered his computer his best friend and companion.

Some questions which this five star movie raise:
1) Will anybody make a movie about the equally brilliant mind or minds of the person or people who invented the enigma code?
2) Are people today as tolerant of ‘odd duck’ behavior as Alan Turing’s co-workers were of his?
3) Do today’s young women appreciate how liberated they are compared with Joan Clarke’s narrow life and vision and how important it is to uphold and respect women’s rights?
4) A law was passed in 1957 in Britain (I can’t say more in case you haven’t seen the movie yet): why was it so late in coming and why hasn’t it been embraced worldwide?
5) How does Keira Knightly (Joan Clarke) manage to look so pretty in those awful 1940’s cloth