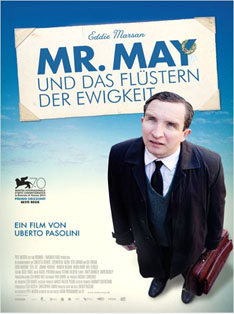 The thought of dying alone is not only horrible, but also a sad reality for so many people in our society. As a “funeral officer”, Mr. May (Eddie Marsan) takes care of those people who have no one left. He clears out their spaces after death, organizes the funeral and never gives up hope finding someone who might have cared about them. But due to some financial restructuring at Council level, he gets fired, since he is too slow and too emotional about the dead. But Mr. May wants to close his last case about Billy Stokes (Michael Elkin), a neighbor of his. While he embarks on a road trip to find Stoke’s relatives, Mr. May starts to review his own life in respect to what it means to be alive.

Mr. May is such a great character in many ways. Although being lonely himself, he makes sure the dead are not forgotten. Gentle but quiet people are so often overlooked by our society, which is why I really cheered when Mr. May started to reconnect with life. Eddie Marsan and Joanne Froggatt as Stoke’s daughter were the perfect cast for this quiet and moving film. (Katia T.)