Song from the Forest

Song from the Forest 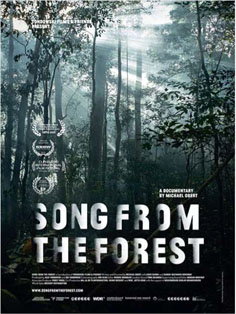 In 2009 Michael Obert had heard of a white man living in a community of pygmies and just by chance ran into him while holding two babies in his arms. He later would meet with him and his family in New York and this film was born. Louis Sarno, an American, first heard a recording of Bayaka music on a train and knew that instant his life’s course. For the last 25 years he has been living with the Bayaka Pygmies in the rain forest of the Congo recording their music. In fact, he has recorded over 1000 hours of this magical music from this culture, more than anyone else in the world. Luckily it is kept in the archives of the Platt Rivers Museum at Oxford University. It is an important collection since many members of the Bayaka tribe have disappeared. At one point in the film Louis Sarno reflects on the last flute player he heard and the melody that he played as the tribe slowly drifted off to sleep. This documentary not only reveals the loss of the rainforests, its animals, its ecosystem and its people but gives a bleak view of what is to become the future of the rainforest. Sarno takes his son to New York to see city life and, despite his interest in all that he sees, he is a fish out of water. The film presents contrasting scenery and music that makes us fill with a bitter-sweet feeling and understanding of Louis Sarno’s desire to stay in that environment. If a song is to be heard in the rainforest today, it is a distant sound which is slowly dying out. Sarno sees the writing on the wall as he records the Bayaka song that the animals are gone from the forest so the forest must be sick.

It was an important film for me to share with my son. I went to Uganda this year and, although they have a national park for the Mountain Gorillas, the Bayaka people have been moved to a desolate mountain far away from the forest. They still live in their little huts but now have to attend school and, influenced by English songs, dance to a different tune. They are no longer the pygmy tribe since they now have married into other tribes. The mountain gorillas are also on the decline since a large number of them were in the Congo and have been destroyed. Only Uganda and Rwanda are making attempts to save them. Fifty percent of the money from the music and the film goes to the Bayaka Support project, so I would love to see you all check out this film. It is worth seeing. (Shelly S.)