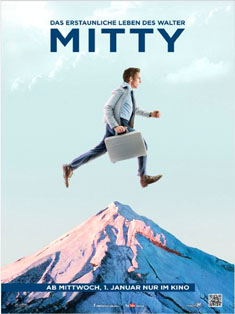 The original Walter Mitty in the 1939 short story by James Thurber was married. Walter Mitty (Stiller) in the new film version is a bachelor and shy with women. He is hoping to get the attention of his co-worker Cheryl (Wiig) at Life Magazine where he in charge of the photo archives. Walter has led a sheltered life in a loving family. His mother Edna ( MacLaine) has even saved all of his childhood gear - skateboard, backpack, etc. He has experienced no adventures save those in his fantasy daydreams in which he always plays the hero.

Life Magazine is going digital and somehow the negative of the cover photo of the last printed issue is not to be found. Walter feels responsible for finding the mysterious photographer (Penn) to get hold of the negative. First stop on his first real life adventure: Greenland. A drunk pilot agrees to fly him to the ship on which Sean has been working. After almost drowning and fighting off a shark, he gets to the ship too late. Sean has departed for Iceland. So Walter leaves the ship in Iceland where he acquires a skateboard and, thanks to his champion skateboarding in his youth, he is able to zoom down highways past mountain ranges to the landing field where Sean would be getting a plane. Again too late! Very dejected, he returns to New York. A visit to his mom, though, unexpectedly reveals that Sean had actually been in her home and clues then lead Walter to believe that he has gone to Afghanistan. So, in true Walter Mitty style, he follows his instincts, dons his old backpack and roughs it all the way to the mountains of Afghanistan where he finds Sean, shares a philosophical moment and plays soccer with the sherpas. He returns to New York a new man - strong and decisive - the kind of man he used to daydream about.

The film also has good actors such as Adam Scott and Kathryn Hahn. (Thelma F.)