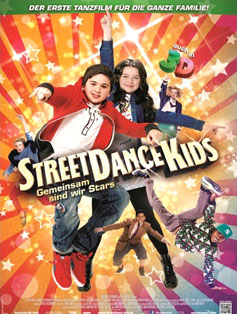 Gina (Jensen) runs a youth center called The Garage where kids can hang out and be themselves, a chance to forget outside pressures of school and ambitious parents. Jaden (Osei-Mansfield) overhears Gina in a dispute with a city official who announces that the youth center will be razed to make room for a parking lot. Jaden has a wild idea for preserving the youth center: organize a talent show and sell tickets. One of the talents could be street dancing, except that Jaden is the only actual street dancer, and he has to keep that a secret because his parents blame his poor grades on this hobby, which might prevent his acceptance in a fancy boys’ school. (This is England where kids wear school uniforms.) Ethan (Stevenson) didn’t realize he had an interest in street dancing, until he fell for Lucy, a member of another street dance group. In order to impress her, he unites with Jaden and together they find four more unlikely candidates and begin to practice. Naturally we are not surprised when, in spite of all obstacles, the talent show is a huge success, especially the six members of All Stars.

Many elements make this an excellent film for the whole family, 10 years and older. Although the actors are around 14 years old, they appear younger or as Gina says to Jaden, “You’re eight at the most. Well, okay, maybe eight and a half.” There are conflicts with an unbending city bureaucrat, with Jaden’s parents who only want the best for their son, with Ethan’s father, an immature, irresponsible man with an unrealistic idea of himself, who has left his wife and two children. The four new members of the dance group could be mirrors of peer groups everywhere: an overweight boy, high society twin ballroom dancers, and a tomboy into judo. It’s all worth every minute just to see Akai and Theo as Jaden and Ethan – both excellent actors. This is Ethan’s first Street Dance appearance, while Jaden appeared in both previous films (StreetDance 3D, 2010 and StreetDance 2, 2012), but this time he has a leading role. There are two artistic dream sequences; one represents Jaden taking his exams, dreaming his way thru questions for which he has no answers. And besides the talented acting and dancing, there is the wonderful music – at least 35 fun songs, which will have you out into the aisles, even if you aren’t a dancer. (Becky T.)