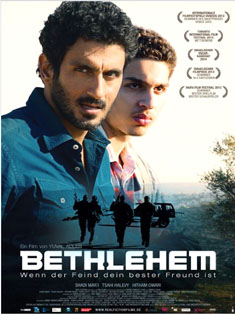 The conflict between Israel and Palestine forms the backdrop of this gripping political thriller, which depicts the vicious rivalry between the Israeli secret service and rebel Palestinian groups such as Hamas and the el-Aqsa-brigade. But it also shows the terrible tensions generated by competing loyalties among families and individuals on both sides. Set in Bethlehem, a city governed by Palestinian officials, the film revolves around the attractions and uncertainties of a relationship between an Israeli secret service agent and a young Palestinian informant he has coerced into duty. The agent Razi, portrayed by Tsahi Halevi, is strong, stunningly handsome, and kindly. He advises his young informant in personal matters, protects him and cares for him when he is injured, and exploits him for information at the same time. The boy Sanfur, on the other hand, convincingly played by Schadi Mar’i , longs to be respected like his older rebel brother Ibrahim but also desperately needs the attention of a caring father figure. He agrees to become an informant in order to get his real father out of prison and then becomes increasingly attached to Razi, whom he admires but does not completely trust. This is the decisive question: How can you develop trust when you play both sides as Razi and Sanfur do? When each of the two men is cornered and existentially threatened by his own people, the consequences are fatal.

If you like political thrillers, this is a must to see. I was on edge throughout the whole film. Israel submitted it for an Oscar in 2014 in the best foreign-language film category. Languages: Hebrew, Arabic, German subtitles. (Pat N.)