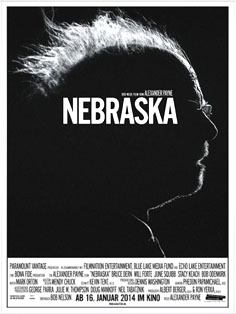 Old Woody’s (Dern) determination to collect his million-dollar win stymies his family. Aware the Nebraska magazine company’s gimmick is to sell subscriptions crusty Kate (Squibb) begs their sons for help, with little sympathy—they remember him as an inaccessible boozehound. Ultimately David (Forte), fed-up and in limbo, opts to drive dad to Lincoln; mom doubts both their sanity. Incorrigible from the moment they leave Billings, Montana brings about making a detour to Woody’s hometown in central Nebraska, where Kate and older brother Ross (Odenkirk) join them. With a slip of the tongue, word spreads like wildfire about Woody’s—supposed—windfall. Relatives and townsfolk true character bubble to the surface. Some get their come-uppance, some prevail, and although Woody might be the “man of the hour”, David is the winner.

The universality in Bob Nelson’s screenplay is vividly brought to life by auteur Alexander Payne. Bruce Dern deservedly won Best Actor at Cannes where the film debuted. Each actor is scintillating, breathing compassion and pathos into their characters foibles; advantageously native Nebraskans fill minor roles. The soft patina of cinematographer Phedon Papamichael’s black/white atmosphere, and Mark Orton’s music enhance further. Welcome this funny and moving road-trip to Nebraska with the Grants—an excursion not to be missed. (Marinell H.)