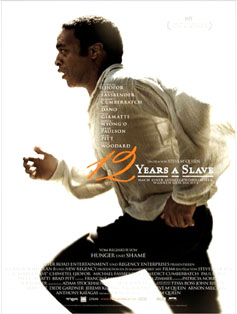 Solomon Northup (Ejiofor) is a free black man living in Saratoga, New York in 1841. When he is offered a job for two weeks playing fiddle with a travelling performing group, he accepts, not knowing that this would end in his abduction and sale into slavery. For the next twelve years, he suffers immense cruelty and violence until he unexpectedly meets a Canadian abolitionist (Pitt) who would change his life forever.

12 Years a Slave is groundbreaking, amazingly well-acted, shockingly brutal, and should have been made years ago. It is astounding that it has taken so long for a slave memoir, told from the point of view of the slave himself, to be translated to the screen. Indeed it is telling that in order for this film to be made, it had to be undertaken by a British director with largely British leads. There is nothing overtly new here. The unjustness and cruelty of the actions of slave owners and overseers against slaves is something every school child learns about. However to see it in film is what makes it concrete, what makes it real, and that is something that many people in America, and indeed the world, need to have cemented into their minds. Perhaps that is why it has taken so long for such a film to be made, for it is difficult to come face to face with the uncomfortable truths of our own past. Instead it is easier to gloss over the truth, but a film such as 12 Years a Slave doesn’t allow for such things. It is a tough pill to swallow, but one that we must take if we are ever to truly understand the past and make strides in future society.

While there has been much talk about Michael Fassbender’s portrayal of the cruel slave-owner Epps, the real breakout performance is Chiwetel Ejiofor as Solomon. His quiet and subtle performance allows the humanity of his character to ring out. He is not some one-dimensional good person, but rather a complex human being who has to make extreme sacrifices of his dignity in order to survive. This is not to say that Michael Fassbender was not excellent, but to downplay the importance of Ejiofor (and indeed, Lupita Nyong'o’s performance of the broken woman Patsey) would be to ignore the aspects of the film that made it so strong. Without their humanism, Fassbender’s performance would fall flat. His performance is entirely dependent on the abilities of Ejiofor and Nyong’o to make you care. This multidimensionality of the story and of its characters is what makes 12 Years a Slave a truly powerful film. Without this strength, the film would have struggled under the weight of the subject matter, but the characters drive viewer to continue watching, even as sickening events unfold.

There is no doubt about it; this film is difficult and terrible to watch. However, like Schindler’s List (1993) and The Killing Fields (1984) before it, there is an importance to putting such stories into the medium of film. It makes it so the story can no longer be ignored and allows for an emotional connection to the terrible truths of history. This is a film that every adult should watch, and maybe it will allow for a greater discourse and more important films on the topic to be made. (Rose F.)