A Touch of Sin

A Touch of Sin 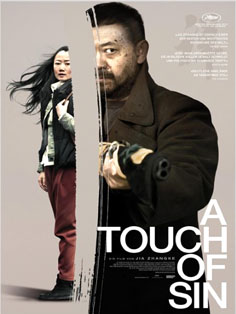 Four botched lives in modern China end in fiascos. Dahai works in a mine where the miners receive practically nothing, while proceeds land in the private hands of the local bureaucrats, one of whom drives a Maserati and is shopping for a private plane. Zhou San sends money home to keep his wife and small child in comfort. He is proud that he has increased his payments, although does not reveal that they derive from thievery. During a home visit he realizes that he has grown impossibly distant from the family. Then there is Xio Yu who meets her lover in a highway rest stop and begs him finally to leave his wife. She faces reality, accepts a job in a sauna and resists the advances of a rich customer.  Xao Hui is a young man, almost still a boy, who owes money and works as a waiter in a night club; this job fails and no one can help him on the way to any kind of auspicious future so that he solves the problem in his own way. All four solutions are violent.

Director Jia Zhangke said in a recent interview, “This film concerns four deaths, which actually happened in China over the last few years: three murders and one suicide. The Chinese population is well informed about the details, which happened in Shanxi, Chongquing, Hubei, and Guangdong – a huge area which reaches from north to south. I wanted to adapt these news reports into an all-encompassing portrait of life in modern China.” Zhangke filmed in four different parts of China: Shanxi (his place of birth), Chongquing, Hubei, and Dongguan, which is evident through the various dialects spoken. This would, of course, only be obvious to us if we see the film in Chinese and also understand the language. He also said that he tried to incorporate the idea of Wuxia or martial arts films; the title purposely resembles that of A Touch of Zen a famous kung fu film by King Hu in 1971.

I am amazed that this film could ever show in China, a country which still tries to project an image of a fair (if not always good) life for all. That is not so. Jia Zhangke goes on to say that since the exit of Mao, the rate of robbery has increased 3000-fold and “China is the most capitalistic country in the world.”  The film has showed in all the major world film festivals: London, New York, Vancouver, Abu Dhabi, Toronto, Munich, etc. It won best screenplay at the 2103 Cannes Film Festival. (Becky T.)