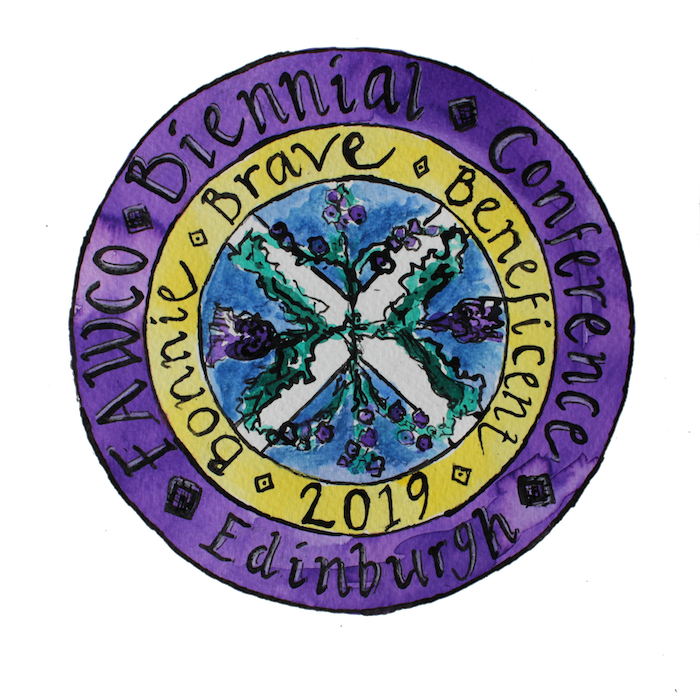 The FAWCO Biennial Conference delivered the theme Bonnie, Brave and Beneficent with skill and energy. Here are only a few of the instances that encapsulate a very successful conference.


Bonnie were the 166 full time attendees who all enjoyed the lovely setting at the beautiful Dalmahoy Resort in Edinburgh, Scotland.

Bonnie were the men in Kilts who flamboyantly addressed the Haggis, the Vegetarian Haggis (!), with the words from the famous Scottish Poet Rabbie Burns. As far as I understood they basically told the Haggis how tasty it was and that we could not wait to eat it before stabbing the bonnie thing. A very dramatic and emotive ceremony.

Bonnie the ladies enjoying a Scottish Ceilidh. Swinging around in their Scottish dress as the caller quickened the pace.


Brave presentation by Kirin Saeed - Audio Description for the Blind and Access to the Workplace for those with Sight Loss opened up a fascinating world of visual impairment and offered an invitation to the sighted to open their eyes. Kirin first acquainted attendees with Audio Description at it is used in movie theaters, Netflix, television, film, dance, opera and visual arts. Thus transforming a production into an experience on par with or even beyond that of sighted individuals. Kirin explained that the descriptions are not only of immense benefit and enhancement of the world to visually impaired people, it is also a lesson to the sighted to stop, think, look and listen! The sighted people of this world tend to take for granted what is right in front of them, and the ability to describe your environment and to really visually take in what is right before our eyes is an enhancement of the world for all. The sighted and the visually impaired. Kirin brought the attendees on a journey, to understand how their description of the world is understood by those around them. She asked one member of the audience to describe a room in their house while another member drew what they described on a whiteboard. It become immediately apparent how the description was lacking and causing vast miscommunication.  On a more fundamental level, it reminds us that each person is an individual with different limitations and understandings of the world we all live in together. For the visually impaired, the development of Audio Description not only allows different media and performance art to become “alive” but it also allows for more access to the rest of the world. Plus perhaps the sighted world can start to understand that they do not see as clearly as they believe. Kirin did an excellent job of opening our eyes and helped us understand that interpreting the world does not require vision, which can sometimes actually be a distraction. Audio Description is of immense benefit to the visually impaired, but it is also allowing the sighted to see more clearly and communication between all become more clear. Michelle Wirt AWCCS Scotland


Brave  Samira Kitman and Roza Salih refugees in the UK. Samira Kitman is an Afghan woman who graduated from Turquoise Mountain, an art school founded by the Prince of Wales in 2006. While attending Turquoise Mountain, Samira’s teachers noticed that she possessed a natural talent for calligraphy and painting traditional geometric designs. After her graduation she created her own art academy. Samira taught both young women and men at the academy. She opened her academy in 2009 and continued to be its director until 2014. During this time she won a contract to decorate a five star hotel in Saudi Arabia with her art. The money she earned from this commission she used to purchase a potato chip factory which she named Seven Days. She saw the factory as a way to lift many people in her part of Kabul out of poverty. In 2014, Samira was declared as Afghanistan’s Woman Entrepreneur of the Year. Her success and publicity caught the attention of a few that felt it was wrong for her to have this honour. Samira’s life was in danger. She got to the point where she felt she must seek asylum in the UK. She has been living in Lincolnshire for the past three years and is continuing to pursue her dreams. Samira continues to paint exquisite traditional designs, create jewellery, and now she creates textiles with beautiful pillow covers. She has met the Prince of Wales, Laura Bush, John Kerry and she has developed a working relationship with the designer Pippa Smith. Roza Salih’s family sought refuge in the UK when she was 12 years old. Two of her uncles as well as her grandfather were executed by Saddam Hussein. She formed close relationships with the other students of her school, many of whom were also asylum seekers. One of her close friends was sent to a detention centre with her family. Often the next step after the detention would be deportation. Roza and her friends were very concerned working hard to raise awareness about her friend’s plight through petitions, and speaking to the Scottish First Minister. Their efforts paid off when her friend was released from the detention centre. This group of girls who fought for their friend became known as , ‘The Glasgow Girls’. Roza graduated with a degree in law and politics from Strathclyde University. She now works for Chris Pine, a member of parliament for the Scottish National Party. To this day, Roza continues to be passionate about fighting for the rights of others. Currently, she is focusing upon the rights for the Kurdish people.  Samira and Roza are determined, motivated, intelligent women who are doing what they can to make this world a better place for everyone.


Beneficent Social Bite is a Scottish social enterprise and one of the cofounders, Alice Thompson, was our Keynote speaker. Social Bite started out in 2012 as a café chain, employing 1 in 4 of their staff from homeless backgrounds, feeding and supporting the homeless community every day. Now, in 2019, Social Bite is also a national scale charity with a much wider mission than the café. Social Bites mission is to end homelessness in Scotland by being a thought-leader and positive disruptive force in the industry.  So far Social Bite have done this by creating an alternative to temporary accommodation through the’ Social Bite Village’ which houses and supports up to 20 people in the community at a time in low-cost yet dignified accommodation, by funding a nationwide “Housing First”programme aimed at getting hundreds of people off the streets and into homes of their own, by offering a  “Pay it Forward” system where customers can buy food in advance for people experiencing homelessness, and by created the world’s largest ever Sleep Out, twice, to raise money and awareness for homelessness and they are going for it again this year Dec 7th, www.bigsleepout.com.

Social Bite has grown steadily and quickly, and has gained international notice attracting President Bill Clinton, George Clooney, Malala Yousafzai and many other celebrities to their Edinburgh fundraising events. Alice is a very inspiring young woman. If you want to find out more, the website is www.social-bite.co.uk.


Beneficent FAWCO has raised over $190,000 for our target project Hope Beyond Displacement. 1290 individuals have been served as of the end of 2018 and more will be reached as programming continues through September 2019, including…


Gerda is a poet, writer, actor, director, singer-songwriter, who works in theatre, television, radio, film and opera in Britain and abroad. She has won many awards, including a BAFTA Best Film Actress for Margaret Tait’s feature film “Blue Black Permanent”. Gerda captivated us with her poetry collection Quines, a word she explained refers to women, girls, lasses, and contains the romance of “queen”. Each poem refers to a Scottish woman of the past, some famous, some obscure or overlooked, from Neolithic times to the 21st century. There are no men, but the women represent a cross-section of society.


First up was “Nessie” who, after all, is female: “… My paps slope with the grace of Jura, / their nipples bright as fresh water pearls, / sleek hips fit for tender cargo.”


Many are women remembered in prose who were denied recognition for discoveries or talents such as: Williamina Fleming, became kitchen maid to a Harvard professor of astronomy, who recognized and nurtured her talent; despite her discovery of new stars and of the Horsehead Nebula, her name was eliminated from Harvard’s list of astronomical discoveries,  The watercolourist Christian Small, assumed from her name to be a man, was denied a job interview with the phrase, “We regret your sex.” Crystal Macmillan, politician, barrister, feminist, and pacifist, who organised the protest against the Treaty of Versailles by the International Committee of Women for Permanent Peace, “… justice … if half of humankind is erased / from its scales, the word can hold no weight.” Margaret Blackwood, confined to a wheelchair, refused merely to “learn to knit … or make lampshades” and fought for rights for the disabled, leading to the introduction of benefits such as mobility and attendance allowance.


There are many more women to discover in her book which is available on Amazon.